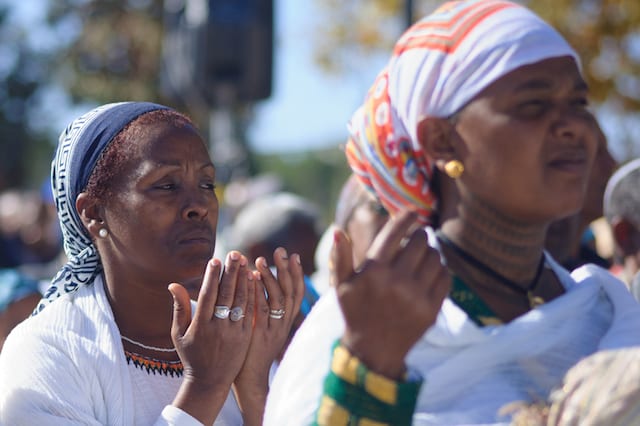 Ethiopia shall soon stretch out her hands unto God (Psalms 68:31).

July: summer with dry and hot days, much like tempers that can flair beyond expectations. Recently, an Ethiopian teen was shot and killed by an Israeli police officer. Riots are taking place in Israel protesting the discrimination against skin color they feel was shown by the Israel’s police force. This teen did not deserve death.

Although citing descendancy from the tribe of Dan, the Ethiopian lost her connection with Israel. However, over 80,000 were airlifted by the Israeli government and rescued from riotous situations and famine in the mid 80’s. Today, approximately 140,000 are living in Israel.

They are intelligent and beautiful people who have followed the Torah and Feasts the best they knew. In their heart, they knew they were Jewish. They told stories of Abraham, Moses, and their sins against God that lead to their being taken away from their Homeland.

Isaiah 11:11 tells us that the Lord will bring back the remnants from Cush. He said that the daughters of the dispersed beyond the Ethiopian (Cush) rivers will bring the Lord offerings (Zeph. 3:10).

Robbie went to Africa several years ago to teach about the Christian Jewish heritage. One of those countries was in Ethiopia. The pastor told him that the people did not have money and to not ask for offerings. But Robbie reminded the pastor that it would bless the people to give to Israel. So they gave what they had: pencils, a chicken, trinkets, a bracelets…it was his best offering received. The chicken was given away to a needy family before boarding the plane back to the Ben Gurion airport, but the rest came to Israel with him. Robbie presented their offering to the Lord.

The Ethiopian eunuch that Philip baptized can be read about in Acts 8:27-40. Today, there is still a hunger to know the scriptures. Many are of the Jewish faith. Many are Messianics.

Sadly, most are discriminated against for jobs, housing, and others resources.

We have friends who are making an impact among the Jewish Ethiopian. They have a growing congregation who are learning about their Jewish Messiah, Yeshua. We want to be a part. With your help, we can send a great offering to let them know how much they are loved. 100% of your gifts will be sent and used to further the Good News to those who want to learn about Isaiah 53 like they did over 2000 years ago. Be a “Phillip” to the Ethiopians today.

Give to the Ethiopian ministry to make a difference